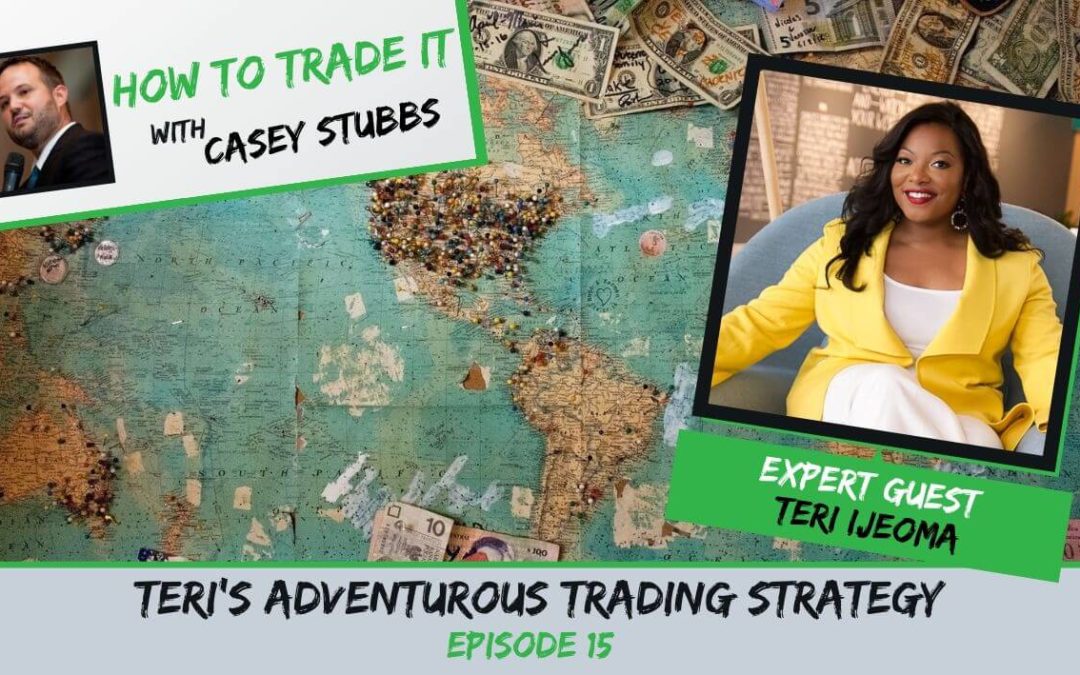 Teri Ijeoma graduated from MIT and interned at Morgan Stanley but realized she wasn’t interested in a life where she worked 24/7. So she decided to start consulting straight out of college. One of her clients was Teach for America, whom she ended up working with before she fully transitioned into education. But education doesn’t pay well, so Teri started trading on the side to supplement her income. She calculated that if she could make $300 a day in the stock market, she could quit her job—so she did. She still remembers the first time she made a trade that was over $3,000. She was sitting on her computer at work and got a notification that her trade was filled. She made more in that one trade than her whole salary for a month. Listen to this episode of How To Trade IT to hear about her adventurous trading journey.

In this episode of How To Trade It, Teri Ijeoma shares her adventures in trading—while traveling the world. Don’t miss it! #stocks #trading #StockMarket #Investing #DayTrading #StockPicks Click To Tweet

After six years of trying to figure it out on her own, Teri started taking classes and learning from real traders. She learned about risk management, stop losses, and reading charts—and things just clicked. She became more consistent after that. Her first piece of advice when you’re just starting trading? Remember to take small and consistent wins because they will eventually add up. Don’t shoot for the stars because you will lose.

Teri points out that a common myth about trading is that you have to start with a $25,000 nest egg. Throw that out the window—you can open an account with $500 and shoot to make 1% a day with trading. In the beginning, Teri alternated her portfolio so she’d never buy and sell on the same day—therefore avoiding the 3 day-trade limit in a 5 day period. She emphasizes that you don’t have to make multiple day trades to get a return on your money.

Another myth Teri often hears is that trading is a gamble. She points out that everything in life is a gamble. Teri equates it to a free-throw. Yes, there's a probability that you’re not going to make it. It's a 50% chance that you will. But she points out that professional basketball players—such as Steph Curry—have a 90% free-throw average. Teri emphasizes that there are ways to become a better trader and have higher probabilities of being successful.

When Teri left her job as a principal she started traveling around the world, spending a month at a time in locations such as South Korea, Thailand, Vietnam, Australia, and Fiji. She came home for a while and finished seminary—and then she went to Israel and Italy. She didn’t save up—she was trading while she was traveling. In her previous jobs, she always put money in her 401k up to whatever dollar amount her company would match.

Teri Ijeoma shares her love for trading and traveling in this episode of How To Trade It. Don’t miss her unique insight into the world of trading! #stocks #trading #StockMarket #Investing #DayTrading #StockPicks Click To Tweet

Teri has a watch-list of about 30 companies that she’s followed for a long time. She looks for healthy companies (so she wasn’t trading the airlines, even when they got really low). Teri identifies as a technical analysis trader. She primarily looks for candlestick formations that tell her where there's a lot of open buy orders or a lot of open sell orders. She tries to get in when the big banks are getting in and sell then they sell.

Teri has grown to a risk tolerance of $100,000—so she’s looking to make $300,000 a trade. At this point, she’s working towards paying for a house in cash, so once she hits her desired percentage, she changes the trade to a trailing stop to lock in her goal then let the rest run. It allows your winners to go further and hit a bigger target when possible.

Teri points out that when a stock is hitting it’s all-time high and seems consistently high, it will eventually drop. Especially if it’s heavily overvalued. So Teri shorts the stock when the momentum of the overall market is down because the probability of your short working out is higher.

She compares it to selling an iPhone. Let’s say you sell it for $1,000—then go on eBay and purchase the same model for $600. You get to keep the difference. So you still make money, but instead of buying low and selling high, you just switch the order. You're going to sell first high and then buy low.

Keep listening to hear how Teri paid off all of her debt with stock trading and other notable tips she uses as a successful trader.

In this episode of How To Trade It, Teri Ijeoma shares a simple analogy to understand shorting a stock. Check it out! #stocks #trading #StockMarket #Investing #DayTrading #StockPicks Click To Tweet