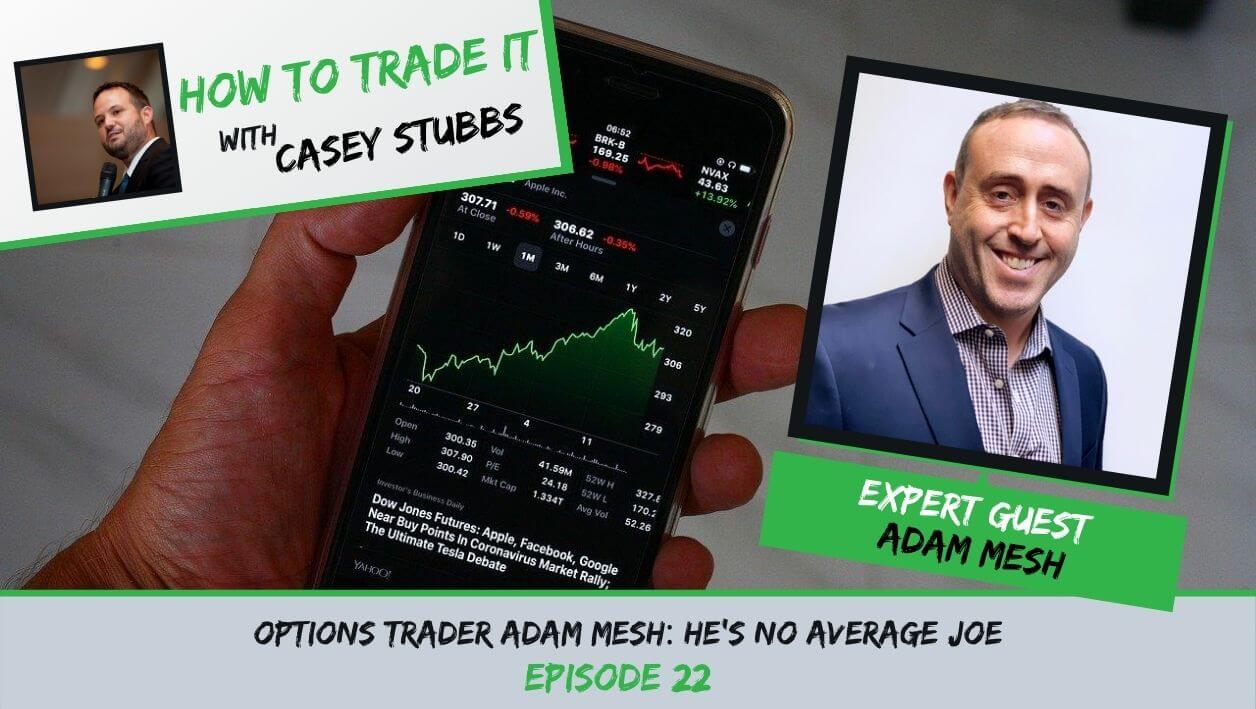 Adam Mesh has been trading since 1997. He worked a job day trading with millions of dollars for 6 months—then went out on his own. He’s now the CEO of Adam Mesh Trading Group. Adam has learned a lot of lessons along the way—and shares a few in this episode of How To Trade It.

If you’re new to trading and have been struggling, Adam shares some tips for you. He’s always rooting for more traders in the market, because the more people that are in the game, the more opportunities there are in the market.

(And if you didn’t know, Adam is famous for being on the reality TV show ‘Average Joe’)

Options trader @adammesh shares some trading tips in this episode of How To Trade It! Check it out! #stocks #trading #StockMarket #Investing #DayTrading #StockPicks Click To Tweet

Adam points out that trading isn’t like gambling—but you do have to play like a poker player: “I think trading is a skill and you have an edge and people CAN be successful at it. Versus gambling is more luck. But one of the things I do find to be similar is the best poker players lose the most hands. And that’s because they fold quickly, they cut their losers short—and the best traders do the same thing. They take losses quickly and willingly rather than letting something work against them.”

The #1 thing that Adam has learned is to embrace discipline. Just like a poker player, you have to cut your losers and know when to shut off the screen. In real life, you get knocked down and get back up. In trading, you want an ‘If you get knocked down, get out’ strategy. It’s something you have to learn to navigate psychologically, but the experienced traders have mastered the concept. Always be disciplined enough to exit your losing trades.

In the early 2000’s Adam hit a point where he was losing $5-$10k a day as the market traded up. One day—with 10 minutes left in the trading day—he had $1 million in shorts in the market. He had a momentary lapse of concentration and bought $1 million worth of a stock when it was trading around $30. It totalled 33,000 shares. Then, at 4:05 pm Intel announced that they missed their earnings. The stock he had just bought into went down 3 points.

@adammesh shares his worst trading day EVER—and how he bounced back—in this episode of How To Trade It! #stocks #trading #StockMarket #Investing #DayTrading #StockPicks Click To Tweet

Adam used to trade stock and was adamantly against options trading. Why? Because in the 90’s you traded in fractions. But then they changed to decimals, which led to the use of computer algorithms. It made individual trading harder than it used to be. Not only that, but they also allowed sellers to remain anonymous and masked the number of shares being bought/sold. It became a lot harder to compete with just scalp trading, so he switched to options.

But now, any popular stock will have weekly options that are liquid and will move more true to the market. Adam points out that a $0.50 move in the stock market could just be a $0.05 tick with options. You see more individuals move the options market (versus large corporations).

The #1 benefit is the moves you see now—in days or weeks—are what used to happen over years. Now, if you buy in options going out 60 or 90 days it seems like all the time in the world. The market will change SO much in that options trading time-frame. Conversely, no one can buy stock and be confident where it will be 1 year from now. There is also a defined amount of risk.

For anyone that’s struggling as a beginner trader, Adam shares a piece of advice: “Trade light, trade right.” He points out that when a trader is struggling, it’s typically because two things could be happening when they’re trading:

If you’re losing sleep and making emotional decisions there IS something wrong. By starting small and building up from there, you can become much more confident in whatever trading strategy you are using. If you’re making logical decisions and trading your plan you’ll make it in the long haul. So anytime someone struggles, Adam likes to see them go smaller—so that the money matters less—and get themselves in a rhythm. Then you build back up from there.

How do you choose a trading strategy? Where do you find a good coach and mentor? Adam shares his thoughts—so keep listening!

New Traders: According to @adammesh you need to trade light and trade right. What does that mean? Find out in this episode of How To Trade It! #stocks #trading #StockMarket #Investing #DayTrading #StockPicks Click To Tweet