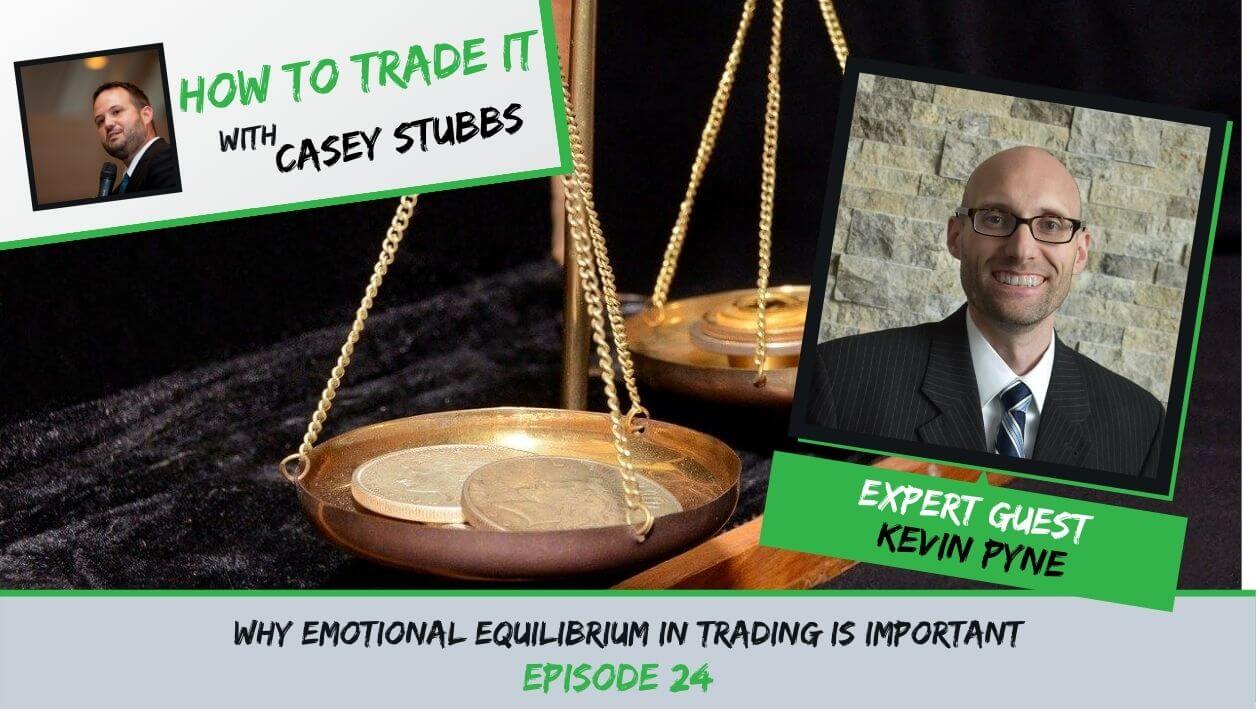 At the beginning of Kevin’s career, he worked at Investools (a former TD Ameritrade project). As an employee, he had access to the education he sold for free. So he took the courses and he started out paper trading with futures. Kevin learned the craft to be a better salesman—then found trading was exactly what he wanted to do.

What did he trade in the beginning? How does he believe emotional EQ plays a role? Why does he believe trading is the hardest easy thing you’ll ever do? This episode of How To Trade It is packed with his quote-worthy words of wisdom. We know the importance of trading psychology and making sure all trades are made with a level head. We also know how important it is to build a trading risk management strategy. In this episode, we’ll take a close look at the connection between our emotions and our trading strategies.

Kevin Pyne: Futures and Forex Trader shares his strategies and insight in this episode of How To Trade It! #Stocks #Stock #StockMarket #Trading #Investing #Forex #Futures #Investing #DayTrading #StockPicks Click To Tweet

Every trader deals with devastating losses that they have to learn from. Kevin is no exception. He was in a good position financially and started becoming overconfident in his trades. He was so confident he was right that he lost 30% of his account overnight. He notes that the despair, the anxiety, and the panic that you have when you lose money has to be grappled with. The risks of trading psychology can be especially hazardous for day traders. Kevin realized that if he wanted to re-earn these gains, he would have to make rational decisions.

If you’re overconfident, euphoria blinds you just as much as discouragement does. Trading is a series of trades, it’s a process. Kevin notes that as soon as trading became boring, that’s when his results became exciting. Euphoria, on the other hand, always comes with a crash.

You can’t get rid of emotions in trading. Any stimulus causes a reaction—and we will feel emotion. Kevin emphasizes that we can habituate and acclimate ourselves to stimuli to manage and use our emotions.

If Kevin feels anxious when he’s trading, it’s a signal that he’s trading too much size and needs to reduce his position. If he starts to feel overconfident, it’s a reminder that it’s time for a break. It’s all about finding emotional equilibrium. Use the fear to avoid being reckless. Kevin notes that “Using my emotions made me become a better trader.” Not removing them or controlling them—using them.

You need to have a “Why” to keep you going

On September 20th, 2010 Kevin wrote in his journal that he was going to be a professional commodities trader. He wanted financial freedom to spend more time with his family. He was going to do whatever it took.

Kevin learned that an obstacle is just the next step. He tells his traders that he’s no more special than they are and doesn’t necessarily have more knowledge—he just wants it more. He’s willing to sacrifice and do what it takes to reach success. That’s why he says you need to keep your vision—you’re why—at the forefront: “My ‘Why’ is bigger than the obstacle.”

There is a high turnover and failure rate in trading. Whether you are using price action trading strategies or anything else, it can be easy to get burned out. It requires a lot of work. According to Kevin, “Trading is the hardest easy thing you’ll do. If you have a big enough why and big enough desire, then no obstacle will seem too big. But if you’re just treating it like a hobby, you’re going to get hobby results.”

If you want it bad enough, you’ll keep coming back. But the bottom line is that not everyone is cut out for trading—and that’s okay.

According to Kevin Pyne, you NEED to have a “Why” to keep you going in trading. Listen to this episode of How To Trade It for more of his wise words! #Stocks #Stock #StockMarket #Trading #Investing #Forex #Futures #Investing #DayTrading… Click To Tweet

Trading: The hardest easy thing you’ll ever do

Kevin points out that anybody can learn to read a chart. Anybody can learn what an indicator does. The real trick is that you have to learn your self. Most people aren’t willing to look in the mirror and say “I messed up. I’m wrong.”

The question Kevin had to ask himself: How can I learn how to make money even if I’m wrong? It’s helped him develop a consistent system. He emphasizes that you don’t have to be perfect to be profitable.

Trading is hard because there are a lot of variables involved. It’s just like any other profession: You have to put in the work and the time to become consistent and profitable. Kevin notes that trading is a way to develop discipline and patience.

Kevin’s mantra is that he day-trades by day and swing trades by night. He views trading as multiple streams of income. His goal is to master 4 or 5 strategies so that when one isn’t working, he can switch to another. He’s been trading the Russell 2000 since 2013. One of his strategies is to wait through the first 15 minutes of the open. Then he draws a 15-minute channel with Fibonacci extensions on either side. Whatever side it breaks to is where he trades to the extension. It’s worked for him for years.

For swing trading, he looks at a daily chart and a 4-hour chart. He looks for support and resistance. If the market is coming to those areas, that’s where he’s buying. He trades small. If he’s right on the first entry, he’ll still make money. But he’s banking on the fact that he’ll be wrong and can save some of his risk allotment. He’s allocating risk and will save some of it if the market goes against him.

Kevin usually sets his max loss at 2–2.5% and he aims to make 1% a day. He doesn’t want to lose in one day what would take more than 2-3 days to make back. This keeps his emotions from taking over. He trades with the goal to “Take what you can and give nothing back.” To hear the rest of his trading wisdom and all about his Trading Buddy Mentoring, listen to the whole episode!