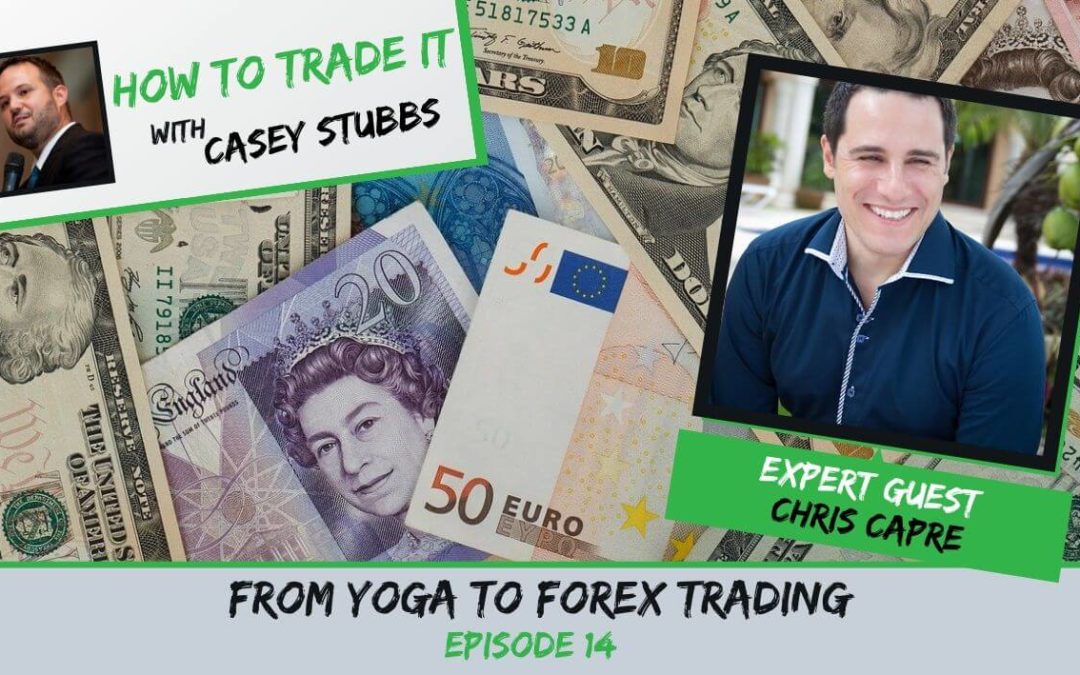 Chris Capre has a unique background that you would’ve never guessed would transition to trading. After obtaining degrees in philosophy and neuroscience, he moved to California to teach Yoga. He began to dabble with investing in stocks and mutual funds. During that time, a client introduced him to Forex trading. Something about Forex clicked with him—so he dove in. Now, Chris Capre is a successful forex and stock trader and the CEO of 2ndSkies Trading. Listen to this episode of How To Trade It for his compelling story.

In this episode of How To Trade It, @2ndSkiesForex shares how he made the transition from teaching yoga to becoming a successful #Forex trader. Don’t miss his unique story! #ForexTrading #stocks #trading #StockMarket #Investing #DayTrading… Click To Tweet

The transition from yoga teacher to Forex trader

After a client handed him a book about Forex trading, Chris dove in and started trading. The language of Forex trading clicked for him. So he took $3,000 and started live trading—and made $1,200 on his first trade. Chris admits, “Through a combination of ignorance, too much leverage, and not really knowing anything about the markets I was able to take that $3,000 and turn it into $83,000 in 6 months.”

Chris launched into a winning streak that went on for months, averaging out to a 71% win rate—which is unheard of. His overconfidence led to his first downfall. Overnight, a trade tanked and by the end of the next day, he had lost $25,000. By the end of the month, he was down $50,000. It rattled his confidence and he felt like he couldn’t find a winning trade.

Chris was depressed and in such a bad state that when he was on a walk a homeless person asked if he was okay. Listen to hear what happened next that made a life-changing impact.

From Forex trader to FXCM Broker

Chris took some courses and began to improve his trading. He made fewer mistakes and gained some confidence back. He decided to apply for a job opening to be a broker—with zero experience—but they ended up hiring him. They paid to fly him to New York, housed him in an apartment, and trained him to be a broker. The experience was like living in a pressure cooker—but he grew quickly.

Eventually, they opened an office in San Francisco and sent him back to California. The office was packed with good traders. They lived and breathed trading. He worked as much as he possibly could and soaked it up like a sponge. His next life step was a transition to a hedge fund where he did everything from being a broker to working with their audit team. Keep listening to learn about his transition to training!

@2ndSkiesForex spent a good chunk of years as a stock broker. In this episode of How To Trade It, he talks about what he learned from his journey. Don’t miss it! #ForexTrading #stocks #StockMarket #Investing #DayTrading #StockPicks Click To Tweet

You must remain teachable at all times

Chris believes that the key to successful trading is to remain teachable. If you want to become a professional—you NEED professional training. He notes that “Every path to a professional level requires some sort of mentorship and training. There has to be feedback from somebody outside of you.”

Every great athlete has a coach that gives them feedback. Tom Brady—nicknamed the ‘Greatest of All Time’—still practices, trains, and receives feedback from multiple coaches. The guy knows how to throw a football but still works with an elite quarterback coach. He recognizes that even a 1% difference can make a huge difference in how he throws the ball. If he’s the best at what he does—then what kind of training do WE need?

He also believes as a mentor himself, you should always be learning and growing in your chosen field. No one has perfect self-awareness—It’s easier to give feedback to others because it doesn’t impact you. When people are left to themselves, they’re left trying to protect themselves. You want a mentor to call you on things you’re doing wrong.

So how do you find a coach or mentor that fits? How do you keep growing to the next level? Listen to hear Chris's take.

People as a whole tend to be harder on themselves and don’t give attention to their wins—but they amplify their losses. Chris points out that humans have 500% more neural real estate dedicated to noticing negativity because as a species we are aimed towards survival. We aren’t under threat, but our nervous systems are still wired that way. We must pay attention to the positive things as much as we do the negative, or the wiring will be imbalanced.

Chris is making some transitions with his trading community as he moves from Forex trading towards stocks. His goal is to continue to emphasize training on core skills over strategies. The root and core of what we do is skill-based so if you learn the right skills, you can trade any market that you want. Listen to the whole episode for more insight from Chris!

In this episode of How To Trade It, @2ndSkiesForex applies neuroscience and psychology to trading and shares how changing our mindset changes our results. Don’t miss this one! #ForexTrading #stocks #StockMarket #Investing #DayTrading #StockPicks Click To Tweet