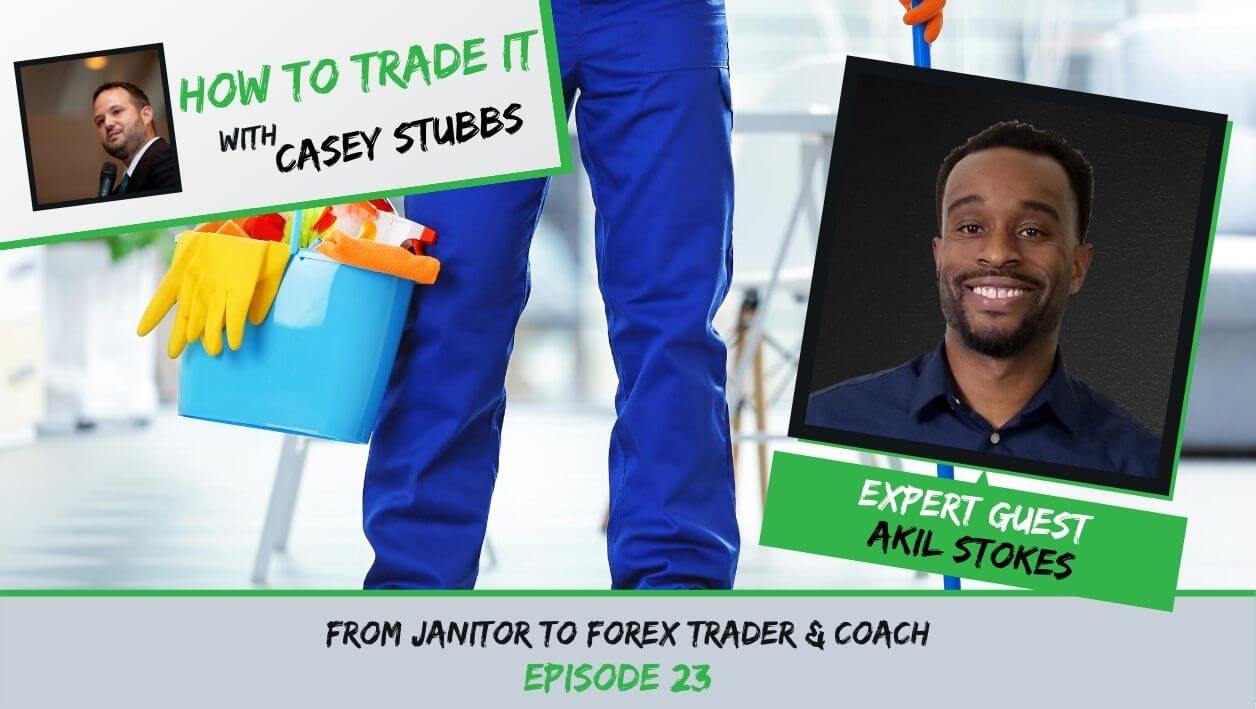 Why is it SO important to have a tested forex trading strategy? What about risk management, why is that important? The bottom line is that you want to work from a strategy so that you have consistent results—not lucky ones. Today’s guest on the How To Trade It podcast—Akil Stokes—emphasizes that you need to place process over the outcome as a Forex trader. Why? Because it can make your break your success. Listen to hear his thoughts on the matter!

Akil is an investor, Forex trader, trading coach, and host of The Trading Coach Podcast. Additionally, he is the co-founder of Tier One Trading, featured in Forbes as one of the leaders in trading education. He got his start in 2007 while working through college and juggling three jobs, one of which was a janitor. Every extra minute was devoted to learning about trading. Akil is also a Track & Field Coach at Millersville University and a proud husband and father of two. His drive is purpose & legacy.

Hear how @AkilStokesRTM puts process over the outcome for consistent results in this episode of How To Trade It. Go check it out! #Money #Trading #Investing #Stocks #DayTrading #ForexTrader #StockMarket #Business #Today #Forex Click To Tweet

Risk Management (What Is That?)

Like a lot of people, Akil had NO idea what he was doing when he started in the stock market. He didn’t know anything about risk management. He never really had any rules-based strategies, approaches, or routines. Akil notes that “There was no consistent way that I had of attacking the markets, especially making the jump from the stock market—where I was more of an investor—to the Forex market, where I became more of an active trader.”

Managing risk is one of the most important components of forex trading. In his words, he was “Buying stuff I thought would go up, cashing out at random places, and buying other stuff.” It was during that rudimentary learning process that he fell in love with trading and started having serious thoughts of wanting to do it for a living. After dabbling in stocks and penny stocks, Akilultimately settled on Forex.

Are you just getting lucky, or are you using a solid strategy? In his early days—without rhyme, reason, or a plan—Akli’s results were all over the place. He lacked consistency, had no rules, and no routine. In his words, “It was no different from me going to the casino and just getting lucky, hitting a couple of numbers and then thinking that I did it instead of just being lucky in the moment.” In terms of winning—he may have started as a player— but he’s become the house! How did he do it? Consistency. To learn more about his strategy, keep listening! If you are just getting lucky you may want to check out this forex trading for beginner’s guide to increase your knowledge of the basics.

Get consistent, not lucky! Don’t miss the new episode of How To Trade It and see what @AkilStokesRTM has to say on the matter. #Money #Trading #Investing #Stocks #DayTrading #ForexTrader #StockMarket #Business #Today #Forex Click To Tweet

No strategy = No results.

You NEED to have a strategy with a positive expectancy—something verifiable and repeatable that you can test in the market over time. Risk analytics can help minimize the probability of losing money, while still maintaining a strong upside. This strategy should prove to yourself that the results are favorable. You want something you can repeat day-in and day-out, week after week.

As long as you’re executing that plan the same way each and every time, you’re limiting mistakes. You’re not taking targets earlier, moving stops back, or all of the other “funny stuff” that traders do. You’re going to have the edge—and you’re going to be profitable.

How to Overcome Setbacks and Get Back to The Basics

Akil took a $30,000 hit on a trade because of poor risk-management and an error in judgment. If he would’ve followed his plan, he would’ve made it all back—plus another $30,000. But he allowed the loss to affect him psychologically, and he stopped trading. Akil actually stopped trading for months.

But he decided to come back and make a fresh start. He got a coach and invested in mentoring. He really got back to the basics and rebuilt himself as a trader. It took a few months for him to get through all the training and re-establish himself as a trader. He realized that he was making a lot of psychological mistakes. But he learned from his mistakes.

The truth is, you will have setbacks. When you do, you just need to get back to the basics. You will need a mentor or a coach to help you get to the next level. Set a goal to focus on the process over the outcome. If you make one less mistake this month than the month before—if you can do that—then you will be ok.

Overcoming setbacks and getting back to basics, we all have to do it. Learn how @AkilStokesRTM does it in Ep 23 of How To Trade It! #Money #Trading #Investing #Stocks #DayTrading #ForexTrader #StockMarket #Business #Today #Forex Click To Tweet